The order of selections has been confirmed for the KFC BBL|12 Draft for overseas players, to be held on Sunday, August 28 and broadcast on Fox Cricket, available on Foxtel and Kayo Sports.

Further information regarding the order of selections and broadcast details is below.

Learn more about the KFC BBL|12 Draft on our website.

Two weighted lotteries were undertaken on Wednesday, July 20, in the presence of authorised Club officials, the BBL Draft Committee, CA security & integrity and an independent scrutineer to determine the order of selections.

After missing the KFC BBL|11 Finals, Melbourne Stars (one entry), Brisbane Heat (two entries) and Melbourne Renegades (three entries) were placed in the first lottery. The remaining Clubs, all of which played Finals last season, were entered in the second lottery.

The order of selections for the KFC BBL|12 Draft was ratified following the weighted lotteries and will be as follows:

As revealed in June, the Draft will include four rounds, with clubs to select a minimum of two and maximum of three players in total. Clubs must pass in at least one round. Round 1 will follow the order as stated above, with Rounds 2 to 4 to follow a snaking order. 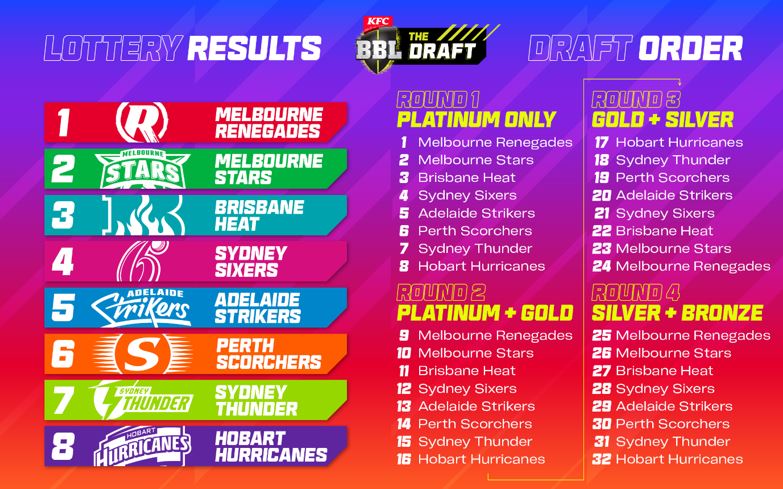 The Draft will be hosted by an all-star Fox Cricket panel of Adam Gilchrist, Michael Hussey, Darren Lehmann, Kath Loughnan and Mark Howard, who will take fans closer than ever before to the key decision makers at Clubs in real time.

“The inaugural BBL Draft is going to be a fantastic addition and we couldn’t be more excited.

“Fox Cricket’s the only place fans can watch every ball of every game of the BBL and T20 World Cup this year and the Draft is a great way to kick-off our biggest cricket season since the start of Fox Cricket five years ago.”

“With a little over five weeks until the inaugural Draft for overseas players, we are delighted to have locked in key details regarding the order of selections, date and broadcast details today.

“The League and all Clubs are grateful to Foxtel for their ongoing commitment to the Big Bash Leagues, including supporting the Draft by leading on broadcast and production.

“The determination of the order of selections is also a significant development, providing certainty to key Club staff including list managers and coaches as they refine their Draft strategies.

“We look forward to working with Clubs, players and agents worldwide to continue facilitating discussions to bring world-class talent to the KFC BBL.”

Over 170 players have nominated for the Draft to date. All players announced are below, with the remainder to be announced soon.

The KFC BBL|12 season will begin on December 13. Download the schedule or add to your calendar via our eCal tool.

Fans are encouraged to stay up to date with the latest information on the KFC BBL|12 season, including tickets and, memberships and the Draft via our website and the Australian Cricket Family. Not already an ACF member? Sign up here.

About the weighted lotteries

The weighted lotteries used to determine the KFC BBL|12 Draft order of selections were conducted by randomdraws.com.au, a service by Trade Promotions and Lotteries Pty Ltd (TPAL®), ACN 601 297 330, a leading compliance specialist for running promotions in Australia. The system is government certified and compliant for all Australian states for conducting trade promotion lotteries.